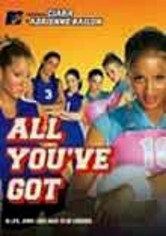 2006 PG-13 1h 32m DVD
When their private high school burns to the ground, a group of teen volleyball players must transfer to their inner-city rivals' campus, forcing the girls to put aside their differences and become a unified team. But the drama between the Madonnas and the Phantoms won't be easy to overcome. Music sensation Ciara, Adrienne Bailon (of the Cheetah Girls) and Laila Ali star in this teen comedy featuring tunes by Outkast, Frankie J. and Lil Rob.

Parents need to know that kids may be interested because hip-hop star Ciara stars in the movie. The father of one of the main characters dies, which may disturb some teens. There's some unsportsmanlike conduct -- Becca sneaks drugs into another player's water to sabotage her -- and some kissing. In general, the film emphasizes learning to get along across ethnic and socio-economic boundaries and the love of family.

Some kissing. One character makes clear she's still a virgin.

Some unsportsmanlike behavior, but characters learn from it to become better friends and athletes.

Some of the most egregious product placement ever seen.