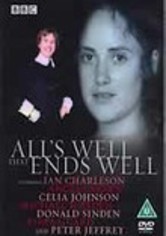 1981 NR 2h 22m DVD
After winning the hand of Count Bertram (Ian Charleson) as a reward for saving the life of the King of France (Donald Sinden), lowborn commoner Helena (Angela Down) is forced to resort to trickery to keep aristocratic new husband. Celia Johnson and Pippa Guard also star in this 1981 TV adaptation of William Shakespeare's classic comedy of airs, originally broadcast as part of a BBC series showcasing the legendary dramatist's complete works.

Genres
Drama, British TV, Shakespeare, Dramas Based on the Book