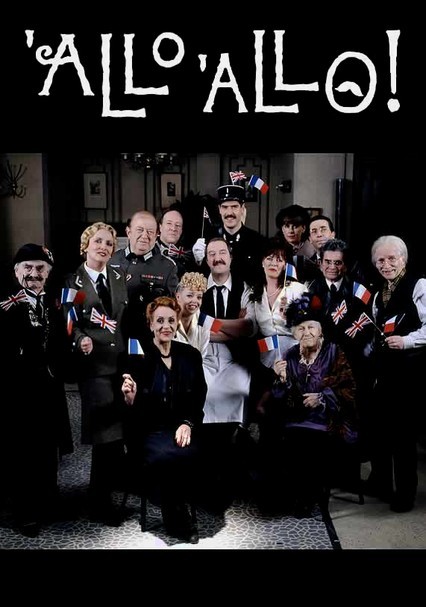 1984 NR 9 seasons
A parody of the BBC wartime drama "Secret Army," this WWII-set BBC sitcom centers on René Artois (Gordon Kaye), a French café owner in occupied Nouvion, France, who always manages to get himself into major hot water with the authorities. What provides many of the laughs are the Resistance's ever-failing, half-baked plans to get their airmen back to England. Carmen Silvera plays Edith, René's out-of-tune, cabaret-performing wife.

For nine seasons, this much-loved BBC sitcom followed the travails of René (Gorden Kaye), a shopkeeper in occupied France who manages, with great regularity, to get himself into trouble with any number of higher authorities. He's hiding two British soldiers, and he's hidden an expensive painting in a sausage. To top it off, he's having affairs with two sexy waitresses -- and making sure his wife doesn't find out is more difficult than he thought.

The zaniness continues in second season of the British sitcom about René Artois (Gorden Kaye), the bumbling proprietor of Café René, a favorite in the village of Nouvion that also happens to be ground zero for French Resistance activity during World War II. The war aside, Artois becomes woefully caught between the attentions of his wife (Carmen Silvera) and his mistresses. Can he juggle it all and maintain his cover?

Boasting high farce and risqué banter aplenty, the six-episode third season of this BBC sitcom set during World War II continues to chronicle the woes and wacky escapades of craven French café owner René Artois (Gorden Kaye). With resistance forces using his bistro as a front for their underground activities, René is busy concealing a pair of downed British flyboys and avoiding his spouse (Carmen Silvera) while chasing after his foxy waitresses.

While a café in Nazi-occupied France may seem an unlikely setting for a sitcom, Gordon Kaye -- playing café owner René Artois -- made just such a setting a popular place to be for nine silly seasons on British TV. In these episodes, we find René dealing with buffoonish German officers and bumbling French Resistance fighters, encountering a "spy camera" hidden in a potato and a host of other sight gags along the way.

Husband, paramour, café owner, Resistance leader: The charming René Artois (Gordon Kaye) has a lot of roles to fill -- and he doesn't always do so gracefully in this British sitcom set in Nazi-occupied France. Surrounded by brave but dim-witted Resistance fighters and oafish Germans, René encounters explosives hidden in Christmas puddings, loads of silly accents and a bevy of beautiful waitresses who all seem to have the hots for him.

In the seventh season of this hilarious BBC series, Gorden Kaye returns as charismatic skirt chaser René Artois, owner of a popular café in German-occupied France frequented by both the German military and members of the French Resistance. Highlights from this season range from René's attempt to pose as his nonexistent identical twin brother to fool his mistress to his scheme to fake his own death and rid himself of his overbearing wife.

René and the rest of the French Resistance fighters are back for this hit British comedy's final season, in which the terribly put-upon café owner anticipates the Allied invasion and a quick end to the Nazi occupation. But things take longer than expected, and in the meantime, René must also elude the Communists, von Klinkerhoffen tries again to kill Hitler, and the precious painting of the Fallen Madonna with the Big Boobies goes missing.