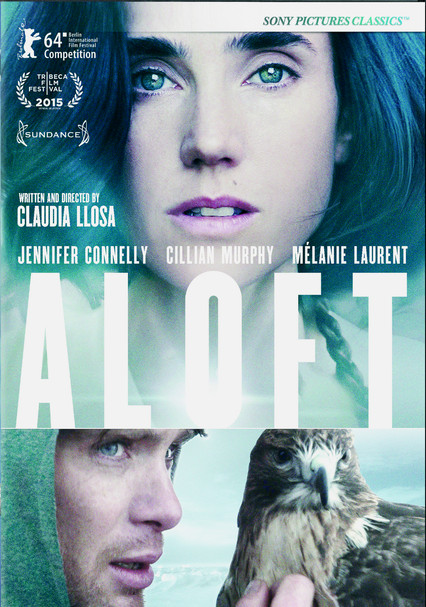 2015 R 1h 52m Blu-ray / DVD
Twenty years after their traumatic separation, Nana and the son she abandoned have an intense reunion, surrounded by a dizzying landscape. The dialogue between the estranged mother and son changes both their lives in this tragedy-driven drama.

Parents need to know that Aloft is an intense drama about a mother who abandons her child after a family catastrophe and then becomes a reclusive healer. There's one fairly explicit sex scene (breasts visible, plus noises and movements), strong language (including "f--k" and "s--t"), and disturbing scenes of violence/trauma (a boy's beloved falcon is shot in cold blood; a boy accidentally sparks events that end with his brother's death; a mother leaves her child). It's intense, but this drama, which stars Jennifer Connelly and Cillian Murphy as the estranged mother and her adult son, is generally appropriate for older teens who can handle the mature content and complicated family dynamics, upsetting scenes, and non-linear plot.

Fairly explicit sex scene between a married couple: The woman's breasts are occasionally visible, and there's moaning, kissing, and thrusting. A man alludes that a woman should have sex with him, but they don't do it.

A couple of disturbing traumatic events: A man shoots young Ivan's falcon, and later young Ivan and his brother are in a car accident that kills one of them. Viewers sensitive to stories about parental abandonment will be upset by the seemingly casual and definitive way in which Ivan's grieving mother leaves him -- for good.

A mother's love shouldn't be conditional, and parents shouldn't leave their children, even when they're grieving. The effects of being abandoned last a lifetime. Sick people and those who love them can be easily swayed to believe in something bigger than themselves.

Adults drink in a couple of scenes.