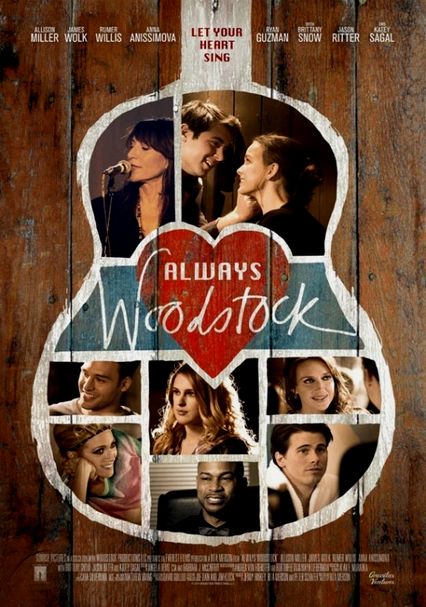 2014 NR 1h 37m DVD
With her life in upheaval, frustrated songwriter Catherine Brown retreats to her vacant family home in Woodstock, N.Y., to review her priorities. Aided by a longtime friend of her parents, Catherine begins to reclaim her sense of purpose.

Parents need to know that Always Woodstock is about a city girl who returns to her childhood home in Woodstock to pursue her dream of becoming a singer/songwriter. Along the way, she has to learn a few important life lessons and figure out who she is -- with a little help from her friends, naturally. That sometimes involves heavy drinking; on one occasion, she gets so wasted that she passes out. There's also some swearing (including "f--k" and "s--t") and several scenes that feature people kissing and fooling around, though no nudity.

Several scenes show people kissing, getting partially undressed, and having sex under the covers. Motion and sounds, but no actual nudity.

Some bickering between couples and friends.

Illustrates the value of remaining true to yourself -- as well as the importance of good, loyal friends.

Adults drink frequently at bars, parties, and other social events. The main character gets extremely drunk at one point and even passes out.