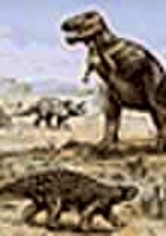 2005 NR 1h 0m DVD
In ancient times, dinosaurs ruled the planet and then disappeared forever, killed by the impact of a giant asteroid. But is that what really killed them -- and are they actually gone for good? This fascinating program explores evidence found in the fossil record that suggests a different kind of disaster could have caused the beasts' demise and presents a controversial theory: that man and dinosaurs might have walked the earth together.