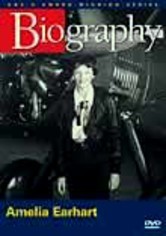 2005 NR 0h 45m DVD
This biographical documentary uses archival footage and interviews to chronicle the life of legendary female aviator Amelia Earhart, who captivated the world with her daring attempt to fly around the globe in 1937. Earhart's success in a male-dominated arena makes her one of the most fascinating women of the 20th century. The program also examines new evidence relating to Earhart's inexplicable disappearance during that fateful 1937 flight.