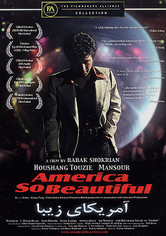 2001 NR 1h 31m DVD
Helmed by Babak Shokrian and set in 1979 amid the fallout from the Iran hostage crisis, this thought-provoking drama follows a small group of Iranian immigrants living in Los Angeles. The story centers on Houshang (played by Iranian music superstar Mansour), a young man looking to realize the American Dream by owning a piece of a glitzy discotheque. But his efforts to raise the money tragically culminate in disappointment and violence.