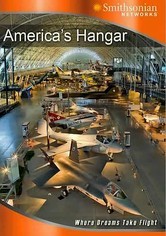 2008 NR 1h 0m DVD
Take a personal tour of the Smithsonian Institution's National Air and Space Museum -- often called "America's Hangar" -- which houses an amazing display of planes and other aircraft that tell the fascinating history of American aviation. This superb documentary surveys the more than 300,000 square feet of vehicles, including Charles Lindbergh's Spirit of St. Louis, early commercial planes and the first manned U.S. spacecraft to orbit the planet.