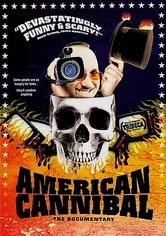 2006 NR 1h 31m DVD
When documentarians Perry Grebin and Michael Nigro begin following TV writers Gil S. Ripley and Dave Roberts, the two are trying to launch a Comedy Central pilot. The mission changes, however, when the pilot fails, and the writers persuade promoter Kevin Blatt to produce their new reality show, "American Cannibal." Things quickly go from bad to worse when a contestant is injured, and the writers become queasy about the project.