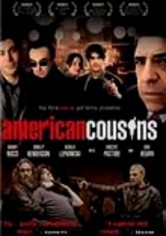 2003 NR 1h 29m DVD
After a deal goes south, mobsters Gino (Danny Nucci) and Settimo (Dan Hedaya) take off for Scotland, where they look up their cousin Roberto (Gerald Lepkowski), the manager of a café in Glasgow. The trusting Roberto believes his cousins are public relations consultants -- until a couple of mob thugs invade his shop and turn his life upside down. Shirley Henderson and Vincent Pastore co-star in this amusing gangster comedy.