American Girl: Lea to the Rescue 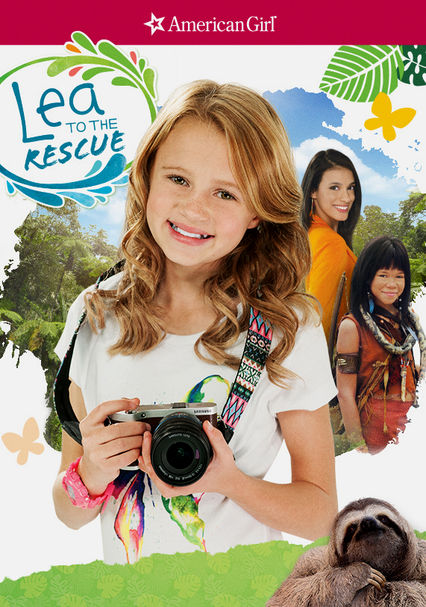 American Girl: Lea to the Rescue

2016 NR 1h 38m DVD
Lea Clark is born for adventure, and her most exciting story awaits deep in the Brazilian rainforest. When Lea's brother, Zac, goes missing while studying the ecology in South America - and she suspects he's fallen prey to a band of ruthless animal poachers - Lea convinces her mom to spring into action.  From the minute their plane touches down, Lea's mom wants her to stay safe in the city, but Lea is determined to save both her brother and the endangered exotic animals she loves! Will Lea come to the rescue of her brother before it's too late?

Parents need to know that American Girl: Lea to the Rescue is an adventure movie based on the 2016 American Girl Doll of the Year. A departure from the previous American Girl films, which have been either historical in nature or gently resolved issue-oriented stories, this film finds heroic 10-year-old Lea Clark far from home trying to rescue her kidnapped older brother from a gang of dangerous animal poachers. The suspenseful tale takes place in Brazil, where Lea must overcome a series of perilous events. Disobeying her mom, Lea is pursued by criminals, confronted by tribesmen, lost in the jungle, and repeatedly put in physical danger (falls, capture, the close presence of exotic wild animals). She shimmies up trees, crosses a river, and proves to be athletic and mostly effective. As in the other movies in the series, there are certainly positive messages (respect for other cultures, surprising friendships, accepting life's continuing changes), but those take a back seat to the movie's overall tone, which is one of mystery, adventure, and danger.

Lots of action, with the young heroine in frequent peril. Lea has a number of close calls as she struggles through jungle terrain, crosses a treacherous river on a board, teeters on the edge of a railing, steps into a net trap, encounters potentially scary jungle creatures, and is chased, threatened, and captured by villains. A police-vs.-criminals climax shows fighting, guns drawn, and arrests.

Promotes awareness of other cultures. Values stressed include problem-solving, determination, follow-through, courage, and commitment to family.

Another in the American Girl doll, toy, and movie franchise. Lea Clark is the 2016 Doll of the Year.