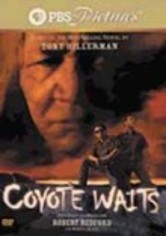 2003 NR 1h 47m DVD
According to old Navajo lore, "Coyote is always out there waiting, and Coyote is always hungry." Produced by Robert Redford, this thriller with a slightly supernatural bent stars Wes Studi and Adam Beach as tribal cops Joe Leaphorn and Jim Chee. The pair tries to uncover the truth about the death of a fellow detective, Delbert Nez, whom they believe may have been killed by someone other than the obvious. Could it be the mysterious Coyote?

Genres
Thrillers, Dramas Based on the Book, Mystery, PBS