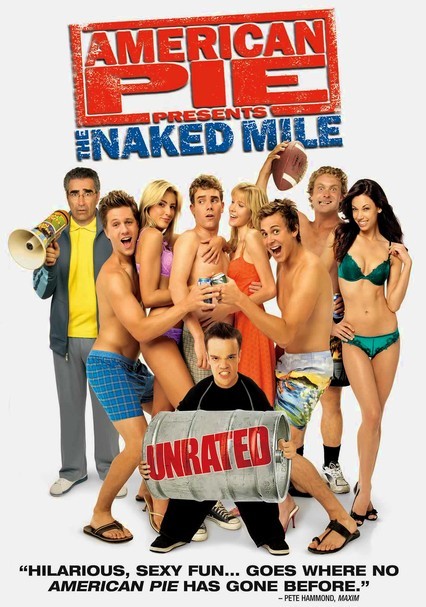 2006 UR 1h 42m DVD
This offshoot of the raunchy American Pie imprint stars John White as Erik Stifler, the virginal cousin and polar opposite of Matt and Steve Stifler, who decides to abstain from sex with his girlfriend until they're ready. Adam's outlook on life changes, however, when he and his friends participate in a naked run across campus sponsored by his cousin's (Steve Talley) university, prompting Adam to come out of his prude shell.

Parents need to know that lots of girls are naked in this film, and lots of boys are too (you don't see the boys from the waist down, but you do see the girls). Much of the language around sex is derogatory toward girls, calling them "pieces of ass" and simply "p---y." Both Erik and Tracy get pressure from their friends to have sex. There are scenes of naked people and girls in lingerie dancing. Erik and Tracy have sex, though it's portrayed as a beautiful thing, part of love. Cooz has kinky sex that he doesn't really want with an aggressive sorority girl.

Cooz gets kneed or kicked in the balls several times. Adam gets jumped by a gang of little people and beaten up.

Despite the graphic scenes and language, the film encourages teens to ignore their stupid friends and figure out when they want to have sex and with whom. The film also includes discussion of concepts like a "guilt-free weekend pass" for sex with others. Repeatedly mocks little people.