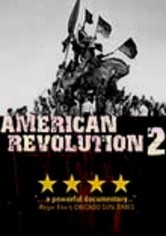 1969 NR 1h 16m DVD
This remarkable documentary captures the social turbulence of 1960s Chicago, highlighted by footage of the protests and riots surrounding the 1968 Democratic National Convention. In the aftermath, the Black Panthers meet with the Young Patriots, a group of Southern whites living in Chicago, to discuss mutual concerns. Shot in gritty, handheld black-and-white by Howard Alk and Mike Gray, the film is a gripping chronicle of a time of upheaval.