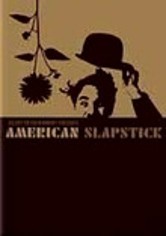 1915 NR 3 discs
In the silent comedy classics collected here, cars explode, cross-dressing villains pursue underwear models and a sexy comedienne chases down her stolen nightie as slapstick provides the rule of the day. Featuring screen appearances by Harold Lloyd, Stan Laurel and Billy West as well as short gems from the likes of Charley Chase, Snub Pollard, Bill Beban and Larry Semon, the collection holds a treasure trove of laughs for fans of early films.