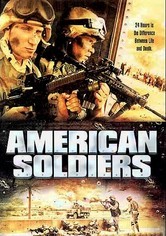 2005 R 1h 43m DVD
Set during the Iraq war in 2004, this fast-paced action-adventure follows a troop of United States soldiers as they set off on a routine sortie in Baghdad. When they're ambushed by a group of Fedayeen insurgents, their normal day suddenly turns deadly -- and the soldiers must draw on all their skills and inner resources in order to survive. Curtis Morgan, Zan Calabretta and Jordan Brown co-star in this stunning dramatic portrayal of a brutal war.