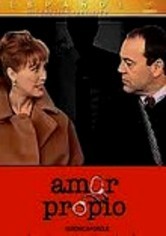 1994 NR 1h 48m DVD
When a big-time banker disappears with a whole passel of cash, his loyal wife, Juana (Veronica Forque), defends her husband's good name against charges of embezzlement -- until she learns the scoundrel was cheating on her. Writer-director Mario Camus's offbeat comedy lightheartedly turns the hard-boiled noir thriller genre on its head while at the same time spinning a twisty story that stays true to the form's conventions.