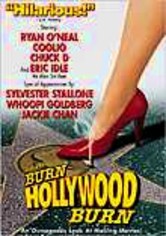 1998 R 1h 26m DVD
In this satire skewering Hollywood moviemaking, Eric Idle stars as a film editor who gets a shot at directing a big-budget film (starring Sylvester Stallone and Whoopi Goldberg, no less) but is foiled by his producer (Ryan O'Neal). The premise builds on the age-old showbiz tradition of directors pulling their names from projects and replacing them with "Alan Smithee" credits to show that too many cooks have spoiled the cinematic broth.