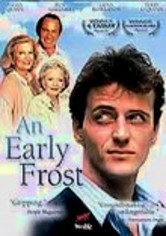 1985 NR 1h 37m DVD
Aidan Quinn stars as a gay lawyer diagnosed with AIDS in this pioneering made-for-television drama, which stirred up controversy in 1985 as the first major film to deal with the newly emerging virus. Extras include the bonus short "Living with AIDS," a moving portrait of San Franciscan AIDS victim Todd Coleman -- it was one of the first films about the disease to be nationally broadcast on public television.