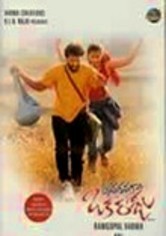 1997 NR 1h 56m DVD
Two eloping lovers (Urmila Matondkar and J.D. Chakravarthi) get caught up in a murder mystery in this road movie from India. After a politician (Kota Srinivasa Rao) kills an opponent, the only evidence is on an audio cassette. When the tape accidentally winds up in the possession of the young couple, they become murder suspects -- and both the cops and the politician's goons are hot on their trail. Raghuvaran and Brahmanandam co-star.