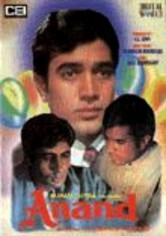 1970 NR 2h 2m DVD
When a doctor (Amitabh Bachchan) wins a literary prize for his first novel, he reveals that his subject was based in fact, not fiction. Via flashback, he tells the story of Anand Saigal (Rajesh Khanna), a patient with a terminal disease who refused to believe death was his destiny. In turn, Anand touched the lives of everyone around him and proved that his spirit could endure in the lives of those who loved him.