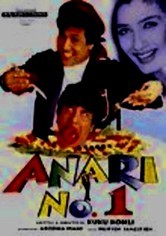 1999 NR 2h 0m DVD
Mistaken identity leads to laughs in this comedy starring Govinda as a hotel waiter named Raja who sets out to find a rich woman to marry. Sapna (Raveena Tandon) catches his eye, but she believes Raja is Rahul Saxena (also Govinda), a suave playboy and Raja's spitting image. When the error is revealed, she conspires with Raja and a friend to kidnap the real Rahul and send Raja to take his place. Simran and Arunai Irani co-star.