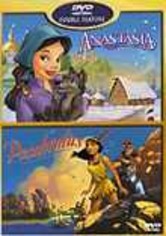 1997 NR 0h 45m DVD
Part of the "Enchanted Tales" video series, this animated film recounts the story of the Russian princess who was the sole member of the royal Romanov family to evade execution during the October Revolution. Stricken with amnesia, Anastasia is forced into servitude by a menacing peasant woman, until a young man named Alexander helps her discover her true identity. The film features three original songs.