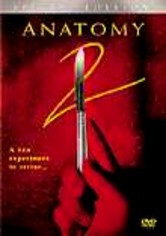 2003 R 1h 30m DVD
Franka Potente and Herbert Knaup star in this thriller as a med student and the detective she enlists to help her when she discovers a nefarious plot -- hatched by the aptly named Anti-Hippocrates -- to create fake body parts. The irony? The group is housed in one of the oldest medical schools in town. The second in a horror film series, Anatomy 2 was written and directed by Stefan Ruzowitzky.