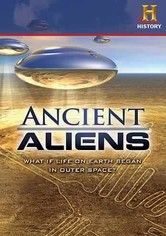 2009 NR 1h 34m DVD
This startling documentary updates controversial author Erich von Daniken's (Chariots of the Gods) provocative theories about the role of extraterrestrial astronauts in the early development of human civilization. Surprising DNA evidence as well as fresh interpretations of archaeological discoveries from the ancient world support von Daniken's theory that humanity has evolved not in isolation, but with the aid of otherworldly travelers.