Ancient Mysteries: Tombs of the Gods: The Great Pyramids of Giza 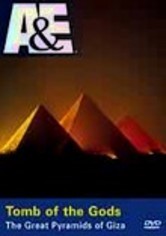 Ancient Mysteries: Tombs of the Gods: The Great Pyramids of Giza

2005 NR 0h 50m DVD
A&E's acclaimed "Ancient Mysteries" examines one of the world's most endlessly fascinating monuments: the ancient pyramids of Giza. Join scholars and engineers as they describe the people and ingenious construction techniques behind these and other ancient Egyptian building complexes, including the Temple of Amun at Karnak and Hatshepsut's Temple in Thebes, and see why these royal monuments have continued to captivate visitors for millennia.