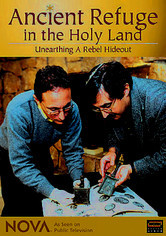 2004 NR 1h 0m DVD
In 1960, in a remote cave in the Judean desert, archaeologists discovered letters written by Shimon Bar-Kokhba, who led the second revolt against the Romans in A.D. 132. Biblical scholar Richard Freund now returns to the Cave of Letters and finds tantalizing clues that lead him to a radical theory: Could the treasure concealed in the cave be long-lost relics of the great temple in Jerusalem destroyed by the Romans in A.D. 70?