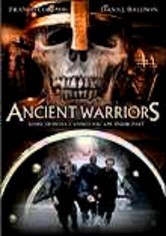 2001 R 1h 33m DVD
As the captain of his Special Forces team, it's up to Aldo Paccione (Franco Columbu) to bring his former group back together to take down a ruthless crew in the process of creating a lethal arsenal of biological weapons. Once Aldo and his crew arrive at their destination, however, they realize they're in for much more than they expected, as the mines to which they were sent hold inexplicable evil inside them.