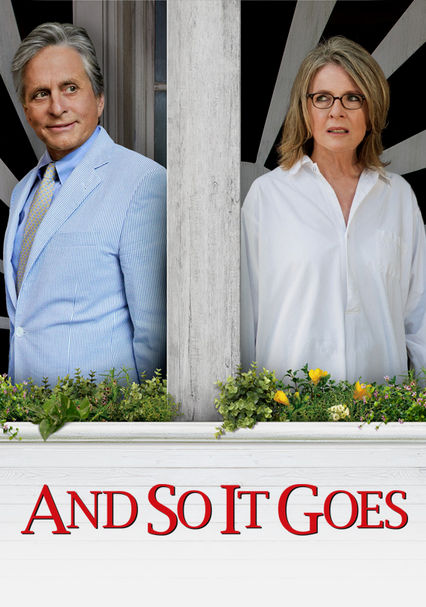 2014 PG-13 1h 34m Blu-ray / DVD
When he's obliged to take over the care of a previously unknown granddaughter, wealthy and self-absorbed Oren is suddenly in need of major help. His neighbor Leah comes to the rescue -- not only bailing out Oren but also capturing his heart.

Parents need to know that And So It Goes is a Rob Reiner-directed romcom about sullen, widowed real estate agent Oren Little (Michael Douglas), who's estranged from his adult son ... who one day shows up unexpectedly and asks Oren to take in the granddaughter he didn't know he had. It's a situation ripe for disappointment and mistakes, which include Oren introducing the girl to her long-lost mother, a heroin junkie, and discussing serious topics (including his flirtation with the next-door neighbor, played by Diane Keaton) and just being the disgruntled person he is. Expect some swearing (including "s--t" and "a--hole"), sometimes in front of children, as well as smoking, drinking, drug use, implied sex, and themes that are too mature for younger kids.

A flirtation ends up with two people in bed -- they're shown kissing and, later, under the covers, shoulders bared, presumably post-coital. Some discussion about sex lives.

A character shoots a dog with a paint gun. An addict talks about robbing houses. Neighbors get testy with each other.

Forgiveness is powerful and changes everyone -- both the forgiven and the forgiver. Sometimes, the crustiest exterior can mask a soft center, as it is with Oren. And those who struggle with addiction can find themselves in a better place.

Adults drink socially (mojitos, martini, wine). A real estate agent always smokes a cigarette (even indoors). A man is shown wobbly and obviously drunk getting out of his car, presumably having just driven. A character is a cleaned-up heroin addict. In one scene, Oren goes to an addict's apartment to track down Sara's mother; there are junkies tripping there. When Sara meets her mother, she's strung out on heroin.