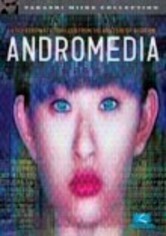 1998 NR 1h 49m DVD
When teenage Mai Hitomi (Hiroko Shimabukuro) dies in a traffic accident, her scientist father (Tsunehiko Watase) uses his experimental technology -- which logs memory and personality as bits and bytes -- to generate Ai, a virtual version of Mai. But an unethical corporation has evil plans for his handiwork, and soon he and Ai are on the run from some shadowy killers in maverick Japanese filmmaker Takashi Miike's offbeat sci-fi flick.