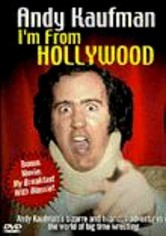 1992 NR 2h 8m DVD
Eccentric comedian Andy Kaufman stunned the world when he announced he was following a lifelong dream to become a professional wrestler. These two features focus on Andy's obsessively strange and short career in the ring. But just what was he thinking when he decided to trade humor for headlocks? Friends Robin Williams, Marilu Henner, Tony Danza and Bob Zmuda are still trying to figure it out.