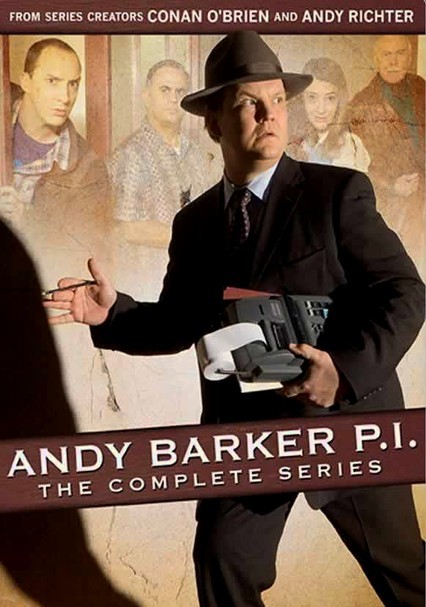 Parents need to know that this sitcom (which was co-created by Conan O'Brien) is relatively light fare by modern prime-time standards. Quirky characters and unlikely scenarios (like a novice P.I. confronting armed Russian mafia thugs in an abandoned building and using a talking Sandra Bullock doll to outsmart them and save their victim) account for most of the show's laughs. If your tweens are begging to watch some adult-oriented TV, this one's a pretty safe choice, since sex, language, and violence are kept to a minimum. Star Andy Richter's superb timing and great delivery help overcome the far-fetched plots and sometimes-uneven writing.

Sex-related talk includes assessments of a person's sexual desirability and terms like "boobs," "wood," and "nipples." Andy and his wife sit in bed together in pajamas; some mild kissing.

Andy is sometimes in peril, though most of it is played for comedy. Bad guys carry guns, though shooting is minimal. Physical fights (punching, kicking, etc.) sometimes result in bruises or scrapes. Supporting characters have died in connection with Andy's cases, but it's never graphic or gruesome.

Stereotypes are sometimes played for laughs, as in a scene showing an obese man running in slow motion with a large ham sandwich in his hand, or Andy and Simon claiming to be stymied by Wally's accent. Lew is often rude and/or confrontational, and he takes particular delight in taunting Simon. Not much diversity in the cast. But Andy is an earnest, well-intentioned hero who wants to help people.

Plenty of references to pop-culture figures, but no notable product placement.

Some supporting characters smoke, despite repeated objections from Andy.