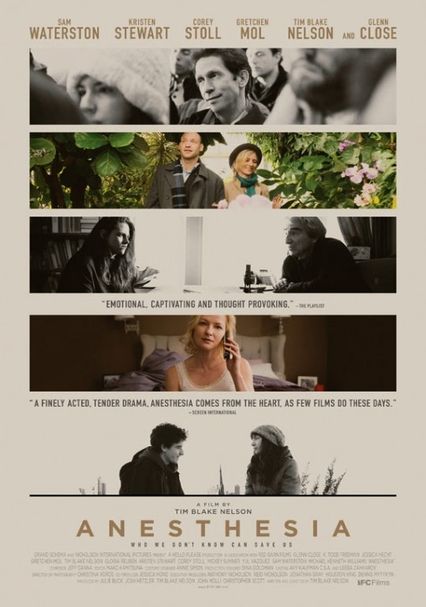 2016 R 1h 29m Blu-ray / DVD
After opening with the savage mugging of a Columbia University philosophy professor, this nonlinear drama flashes back to events leading up to the incident, following the lives of numerous people connected to the assault.

Parents need to know that Anesthesia follows a diverse group of New Yorkers (played by the likes of Kristen Stewart, Glenn Close, Sam Waterston, and many more) who are all seeking to escape some kind of personal torment via drugs, alcohol, and other forms of self-medication. Several different storylines intersect, with their common theme being loneliness and isolation. Many scenes show people drinking, smoking pot, shooting heroin and more, and there's also a lot of swearing, including "f--k," "c--t," and more. Teens talk about having -- and then have -- sex, though there's no graphic nudity; other scenes include sexual talk/references as well. A man is attacked and left bleeding on the sidewalk.

A teen couple kisses and discusses whether it's time for them to have sex. They're later shown having sex (the first time for them both), but there's no graphic nudity. Teen siblings discuss their sexual accomplishments. A married man is shown spending a lot of time with his mistress while his wife stays home, unhappy.

A man is attacked and left badly wounded and bleeding on the sidewalk.

Everyone craves human contact, and its absence can lead to sadness, depression, and even despair. Numbing yourself through some kind of substance/problematic behavior is a major theme of the movie.

Most of the characters use some kind of substance to numb themselves -- including pot, alcohol, heroin, infidelity, and even self-inflicted pain. Many scenes show all of these activities.