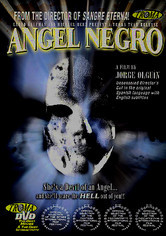 2000 NR 1h 30m DVD
A beautiful young student, Angel Cruz (Blanca Lewin), disappears on the night of her high school graduation. Question is, was she killed in a tragic accident that occurred that night, or did she simply vanish? Ten years later, Angel's former classmates are being murdered one by one, leaving survivors to wonder if Angel -- or her ghost -- has returned to haunt the living. Angel Negro was the first horror film made entirely in Chile.