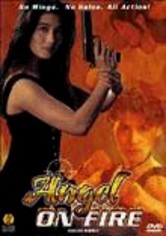 1995 NR 1h 27m DVD
Supermodel-turned-thief Mimi (Melanie Marquez) double-crosses her ruthless partners after they steal a valuable Shaolin temple relic from a museum. Ditching her boss (Phillip Ko, who also wrote and directed the film), she heads off to sell the relic to another bidder. Cops from both Hong Kong (Cynthia Khan) and mainland China (Sharon Yeung) pursue Mimi as she tries to reach her buyer before her old partners catch her.