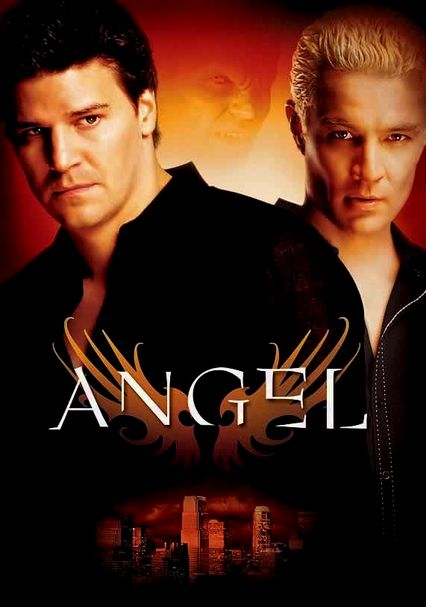 1999 TV-14 5 seasons
In this "Buffy the Vampire Slayer" spinoff, the titular character -- and former love of Buffy Summers -- proves just how difficult it is to deal with a conscience when you've been living without one for hundreds of years. His human soul having been restored by avenging gypsies, vampire Angel (David Boreanaz) now makes Los Angeles his home and redemption his mission -- a task thwarted by the demonic forces that thrive there.

In the first season of this spin-off from Buffy the Vampire Slayer, the vampire Angel (David Boreanaz) has left behind his true love, Buffy, in Sunnydale, Calif. and tries to get a fresh start in Los Angeles. Instead, he finds a whole other breed of bloodsuckers just itching to bring out his dark side. Along the way, he joins forces with an aspiring actress, Cordelia Chase (Charisma Carpenter), who brings her own set of issues to the table.

Brooding, repentant vampire Angel is still trying to settle into life in Los Angeles after leaving his true love, Buffy the Vampire Slayer, in Sunnydale. The show's tempo only get better in Season 2, as Angel is thrown ample danger along the way.

In his third season of this popular, Emmy-nominated spin-off of Buffy the Vampire Slayer, Angel (David Boreanaz), Buffy's former love -- who, just to complicate matters, is a vampire -- continues to attempt to find redemption after so many years of killing innocent victims. Now living in Los Angeles, Angel tries to survive and thrive surrounded by gangs, a companion who has painful visions, and other aspects of a life he wasn't expecting.

Everyone's favorite brooding vampire, Angel (David Boreanaz), sank to the bottom of the ocean in a large coffin at the end of the last season -- and that's where Season 4 of this "Buffy the Vampire Slayer" spin-off begins. Meanwhile, Cordelia (Charisma Carpenter) continues her ascension to a higher realm, as Gunn (J. August Richards) and Fred (Amy Acker) persevere and Wesley (Alexis Denisof) is seduced by evil lawyers at Wolfram and Hart.

Armageddon's just around the corner as everyone's favorite vampire-with-a-soul, Angel (David Boreanaz), winds up the final season of his hit TV series. The broody former bloodsucker is flustered as he contends with his "soulful" rival, Spike (James Marsters), who's materialized in L.A. after closing the Sunnydale hellmouth with the rest of the gang in the final episode of "Buffy the Vampire Slayer." Costars Amy Acker and Alexis Denisof.

Parents need to know that while even grade-schoolers may enjoy the horror-movie aspects of this series (a spin-off of the hugely popular Buffy the Vampire Slayer), its mature themes make it a better fit for teens. Monsters and other creepy-looking baddies make frequent appearances on the show, and some storylines (an implied homosexual romance, for example) are adult enough that parents may want to preview before letting older tweens and young teens watch.

Characters date, but there's no implied nudity or too much beyond kissing. Some implications of homosexual relationships. The vampire myth is traditionally a very sexualized one.

Supernatural meddling results in invisible punches and the like. The vampires' enemies are menacing, scary-looking creatures.

Angel is a bad vampire turned good who now devotes himself to battling evil beings.