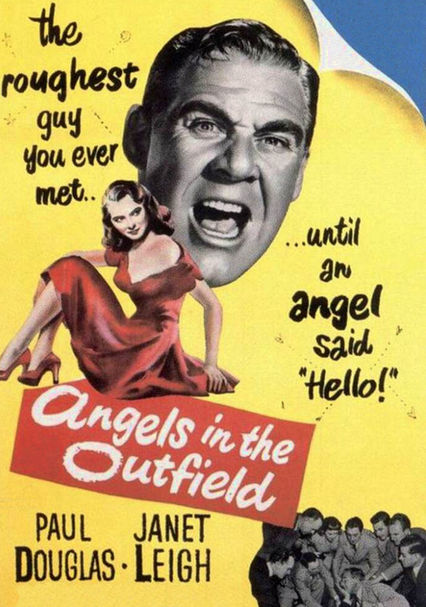 1951 NR 1h 39m DVD
The Pittsburgh Pirates are on a losing streak, and Coach McGovern's bad attitude could have something to do with it. But thanks to a meddling reporter, the prayers of an orphan girl and some help from above, the team may be on the road to a comeback.

Parents need to know that there is a main character notorious for his brawling and profanity; the filmmakers under the old studio censorship code got around that by having his "filthy" tirades scrambled by the sound effects department into a mushy babble. You can't make out a word. It's actually pretty funny, maybe more so than hearing the real obscenities. Also know that this is not the 1994 Disney remake of the baseball comedy filled with ethereal special effects, but rather the less fancy original black-and-white version, which leaves the angels invisible throughout.

While McGovern swears a blue streak, his words are amusingly scrambled on the soundtrack into unintelligible babble.

The movie is about the spiritual redemption of Guffy McGovern, who goes from a profane brawler and alienated bachelor to more or less a gentleman, suitor, and even adoptive father. In one scene two Christian priests and a rabbi provide a united front in his defense. There' s some '50s-style stereotyping of women, in the prissy heroine. And in keeping with the pre-Jackie Robinson MLB, all the players are white.

Plugs for the real-life Pittsburgh Pirates and baseball are pretty inescapable.