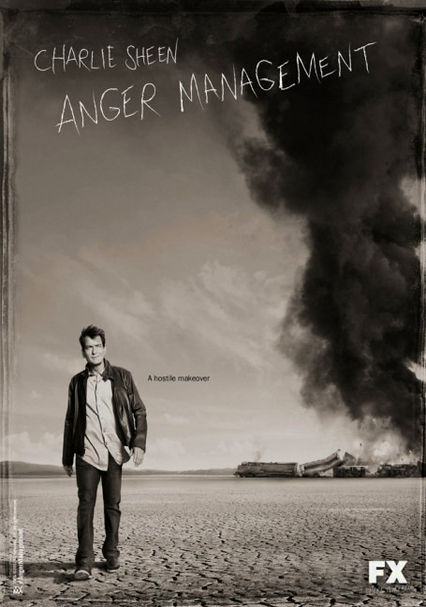 2012 NR 1 season
Charlie Sheen roars back onto television as hotheaded womanizer Charlie Goodson in this sitcom inspired by the hit 2003 movie. Goodson has a knack for getting into situations that could set him off the deep end, often taking others with him.

Charlie Sheen returns to television as a guy with a temper who's having a fling with the only anger management therapist he trusts. Hopping from one bed (and therapist) to another, it's only a matter of time before he blows his stack again.

Parents need to know that Anger Management is a comeback vehicle for actor Charlie Sheen -- whose inability to deal with his own anger issues made headlines -- and features decidedly adult humor, including strong (and sometimes crude) sexual references, drinking (hard liquor, beer, wine, etc.), and lighthearted discussions about violent acts, including murder. Stereotypes about inmates, homosexuals, and other people are frequent. It's not intended to be taken seriously, but it does offer a message about the importance of keeping one's anger in check, and the potential consequences not doing so can have. The Trojan brand is prominently visible.

Contains some sexual content, including scenes of couples kissing, fondling each other's butts, and/or in bed looking sweaty. Female characters are sometimes in sexy nightwear, wearing see-through blouses (bras visible), and taking off their clothes (no sensitive parts visible). Boxes of condoms are prominently shown. Contains references to being "queer" and crude references to genitals, like "balls."

Contains lots of references to punching, kicking, screaming, cutting, killing, etc., which are humorous, but never characterized as appropriate or healthy. Charlie conducts therapy groups in a prison. Cast members are sometimes shown almost losing their tempers or hurting someone.

It's a comedy, but makes a point of noting that allowing anger to control you is inappropriate, and can have devastating consequences. Divorce, parenthood, professional ethics, and other themes are also present. Crude humor.

The Trojan brand logo is visible.

Beer, wine, cocktail, and hard liquor drinking is visible at bars, during meals, and with friends.