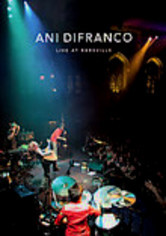 2007 NR 1h 30m DVD
Filmed in September 2007 during the two-day premiere of Ani DiFranco's Buffalo, N.Y., venue, Live at Babeville captures the singer performing 17 tracks, including fresh takes on "Hypnotized," "Napoleon" and "Independence Day." Known for her staunch independence and poetic talents, DiFranco treats the audience to songs ranging from 1998's "Little Plastic Castle" to "Unrequited," from her 2006 album, "Reprieve."