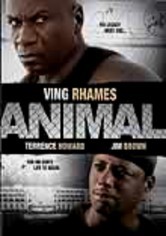 2005 R 1h 33m DVD
Ex-con James Allen -- aka Animal (Ving Rhames) -- has done the near-impossible: He's reformed himself while in a maximum-security prison, with the help of a fellow inmate (Jim Brown). But when he's released and discovers that his son (Terrence Howard) has strayed off the straight-and-narrow, James must dig deep into the "animal" within to save his child, who seems to have lost himself in a criminal underworld set on seducing James once again.