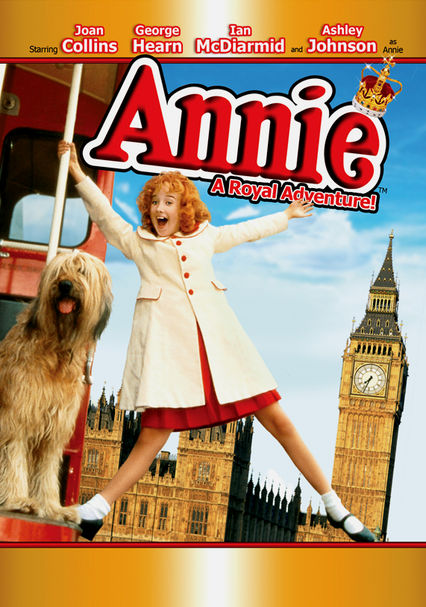 1995 G 1h 32m DVD
Annie, the charming orphan with a head full of red curls, and her beloved dog, Sandy, join her darling Daddy Warbucks for a trip to England to meet the queen. But will a little girl used to a hard-knock life make a good impression on royalty?

Parents need to know that this sequel to the hit musical Annie is not a musical itself, although the character do sing "Tomorrow" at the end, and no original cast members reprise their roles. It's instead a cartoon-y comedy that continues Annie's adventures with Daddy Warbucks. The plucky gang of kids gets into trouble, but they model resourcefulness and bravery in getting themselves out of it. Daddy Warbucks here is a caring, loving, and involved father figure. A character is briefly seen bound and gagged before being rescued, a villain is hit on the head and knocked unconscious, and a few dead rats are seen in a castle.

A door is kicked in and a character who's bound and gagged is freed. A villain is hit on the head and knocked unconscious. A few dead rats are seen in the villain's castle.

Don't let your imagination run away with you. Take the time to think things through carefully. Don't give up; if you keep trying you'll find a solution.

A Cunard White Star sign is seen as the main characters board the Queen Mary. "Sears and Roebuck" is mentioned once.