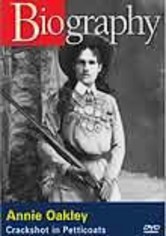 1997 NR 0h 50m DVD
Frontier legend Annie Oakley could shoot a hole through the ace of hearts at 30 paces, her expert marksmanship cementing her place as one of the best sharpshooters of the American West. But more than for her skill with a rifle, she stands out as a gender pioneer, an independent woman who challenged conventions. Through photos, film footage and interviews, this episode of "Biography" tells the story of one of America's most enduring folk heroes.