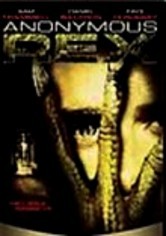 2004 NR 1h 30m DVD
This Sci-Fi Channel original movie based on a series of books by Eric Garcia centers on a secret society of people who are actually descended from dinosaurs but keep their wildly exotic ancestry under wraps. As part of an improbable but imaginative plot, Daniel Baldwin plays a private detective who's really a velociraptor in a holographic human disguise. Sam Trammell, Stephanie Nicole Lemelin, Faye Dunaway and Isaac Hayes co-star.