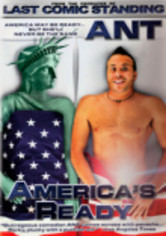 2005 NR 0h 55m DVD
As a three-season regular on "Last Comic Standing," Ant joked his way into the public eye. But while America's readiness for his comedy may be subject to debate, his aptitude for delivering punch lines puts him in a league by himself. In this hilarious stand-up performance, Ant tackles some of the world's most urgent problems, including emergency landings, the effectiveness of "roofies" and -- what else? -- Lee Press-On Nails.