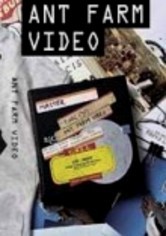 2003 NR 2h 7m DVD
Founded by Doug Michels and Chip Lord in 1968, Ant Farm is a performance art collective that astounds with audacious (and often hilarious) set pieces. This video contains footage of such Ant Farm works as "Cadillac Ranch 1974/1994," "Ant Farm's Dirty Dishes," "Inflatables Illustrated" and the legendary "Media Burn," in which Michels and Curtis Schreier dress up as astronauts and drive their Phantom Dream Car through a pyramid of television sets.