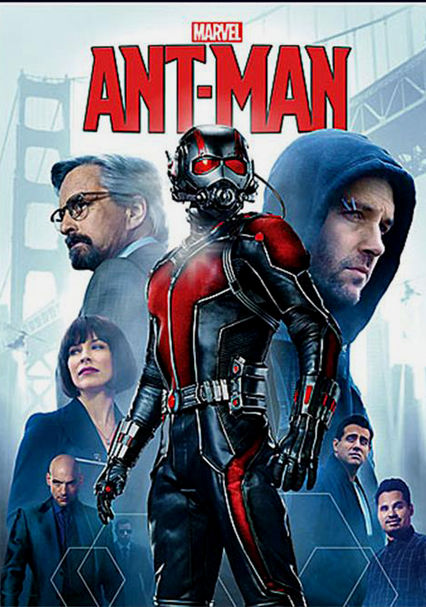 2015 PG-13 1h 57m Blu-ray / DVD
Fresh out of prison and looking for a new start, master thief Scott Lang is approached by Dr. Pym, creator of a technology that can shrink a man to insect size and boost strength. Together the duo must protect the discovery while saving the world.

Parents need to know that Ant-Man is a Marvel Studios/Disney superhero film (based on a Stan Lee comic) that's tied into the rest of the "Marvel-verse." While audiences familiar with Avengers-related movies will have an advantage, it's not necessary to be a Marvel fan to enjoy the film, which stars Paul Rudd and Michael Douglas. There's definitely plenty of action/sci-fi violence -- from fist fights to shoot-outs to a few gory deaths in which the human (or animal) victim turns into gelatinous goo -- but overall this adventure is on the tamer end of the Marvel movie scale. Occasional bursts of language (mostly "s--t," "ass," and "damn") are peppered throughout the dialogue, and there are a couple of suggestive jokes/references, but there's only one (brief) kissing scene and very little drinking. The hero and his young daughter are sometimes separated, which could upset younger kids, but she's never in extended peril. Like Guardians of the Galaxy, this action adventure is full of humor, with some edgy jokes that will go over younger kids' head.

Kissing. An adult woman sits on top of her boyfriend whispering and laughing in his ear. A couple of women are referred to as "hot" in suggestive ways. A man refers to a woman as the "first pair of boobs I ever touched."

Frequent sci-fi/action violence. Weapons include a gun that the villain uses to kill people by disintegrating them into gory goo (in one case, he just flushes what's left of the person down the toilet). During scientific testing, scientists end up killing sheep as they attempt to shrink them. A beloved ant is killed. Many people are shot at during a long stand-off, and one person seems on the verge of death. Fist fights leave bloody bruises. People crash into things. At one point the villain grabs a child, but she's not in extended danger.

Encourages forgiveness and redemption. Flawed characters, particularly Hank and Scott, are given an opportunity to redeem themselves for past mistakes. As with most superhero movies, teamwork and trust are also valued.

Baskin Robbins (and one of their smoothies) is heavily featured in one scene. Other brands/products seen include Cadillac, Ford, iPhone, and Dell. Many promotional/product tie-ins to the Avengers universe, including references to specific members and logos.

Adults drink champagne, beer, and wine socially, but not to excess.