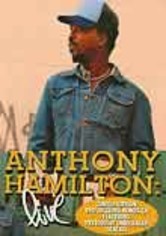 2005 NR 1h 0m DVD
Live concert footage is the prime feature of this packed video. But the goodies don't stop there. Also featured is candid footage of Anthony Hamilton's homecoming in Charlotte, N.C.; his performance of the National Anthem at the Charlotte Bobcats game; behind-the-scenes footage of concert rehearsals; and a penetrating look at Anthony on his tour bus during "The Silk and Sandpaper Tour" with Angie Stone.