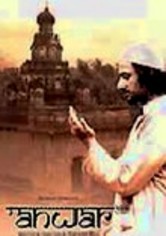 2007 NR 2h 26m DVD
Nursing a broken heart, Anwar (Siddharth Koirala) seeks refuge in an abandoned temple. Tragically, he's mistaken for a Muslim terrorist who's taken the sanctuary under siege, and he soon finds his life in danger. As the situation snowballs into a media circus, opportunists exploit Anwar's misfortune, while all involved try to avoid their own despair. Manish Jha directs this tragic love story set against the social issues of contemporary India.