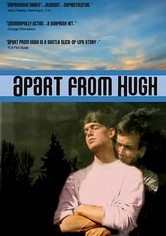 1994 NR 1h 27m DVD
A gay couple drives straight into relationship road bumps in this bittersweet love story. Set in a small town in the American northwest, the tale follows Hugh (Steve Arnold) as he eagerly plans a party for his one-year anniversary with Collin (David Merwin), who's simultaneously reevaluating whether he's really ready for a committed relationship. Jennifer Reed also stars. Extras include outtakes and the short film "Love and Deaf."